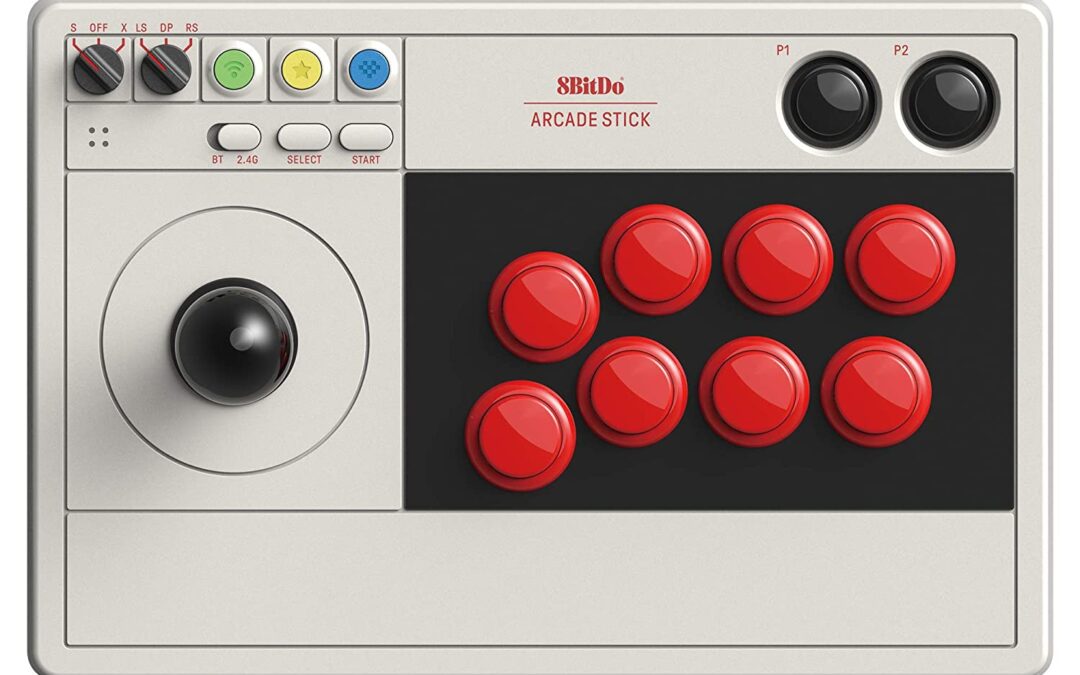 I recently saw an online video regarding a new joystick, the 8Bitdo Arcade Stick. The company, 8Bitdo, is an established company in the third party controller space, known for their wireless gamepads. This is, I believe, their first full on joystick.

The big thing that sets this joystick apart from all the others I have reviewed is that it is wireless. In the back of the device is a USB receiver you plug into your Retro Box, and next to that is a charging port. As you can see from the above photo, there are a number of dials and toggle switches to configure the joystick for whatever you wish to use it with, be it a Switch, PC or other. To use it with the Retro Box, set the left dial to X, the right dial to DP, and the toggle switch to 2.4G. Plug in the USB receiver, charge up the Arcade Stick with the included cable, and boot up.

One of the first nice surprises is that the device pairs with the receiver automatically. No button presses or voodoo rituals to get it to work. Another thing you notice is that what look like unlabeled button actually have lit labels underneath them, very helpful. The device is automatically recognized as an XBox 360 controller, which is surprising, since it has no analog controls. Unfortunately, the buttons are not configured correctly. A, B, X and Y are fine, but it assigns the third and fourth buttons on the top row as Left/Right Shoulder, and the third and fourth buttons on the bottom row as Left/Right Trigger. You will probably want to assign Left Shoulder/Trigger to buttons 3 and 4 top row, and Left/Right Trigger to the same buttons on the bottom. This gives you the correct 3 by 3 layout for games like Street Fighter.

So how is the joystick to use? First, it has a good weight. Heavy and solid enough to use on a desktop without slipping, but not so heavy it is uncomfortable to hold on your lap. The buttons have a good feel and the responsiveness is great. I notice no lag with my button presses or joystick movements. The joystick itself is good, but not my favorite. It is a ball top, and I prefer an oval top, like the XArcade. For me, ball top joysticks are uncomfortable for long play sessions, but your mileage may vary.

The joystick is very responsive, in fact maybe a little too much. The stick is very loose, and needs very little force to engage. It also has very little throw, and a small dead zone. I prefer something with a stiffer spring and a little more throw, like the XArcade Tankstick. There is definitely a learning curve if you are used to standard gamepads, or more professional joysticks. It is not an insurmountable curve, however. My second and third days with the device were a lot better than my first, as I got used to the looser feel.

I tried a number of different games in different genres to put the thing through it paces. For platform game purposes, I chose Super Mario 3 and Sonic 1, playing each through to the first boss fight. I am expert in both of these games, yet I found myself struggling at first. I was over jumping or over correcting because when I thought I was pulling the joystick back to center I was still pushing left or right. Eventually this improved as I got used to the feel of the device.

The only fighting game I am reasonably proficient in is SFII, so I chose the Champion Edition, using my two favorite characters, Ken and Dhalsim. The experience was pretty good. Simple special moves, like fireballs, were easy enough to pull off. More complicated ones, like a Dragon Punch, were more difficult than they should have been. Again, learning curve.

Vertical scrolling shooters like 1942 and Blazing Lazers were a joy to play. Diagonals were easy to pull off, and the responsiveness of the buttons was awesome. 4 way games like Pacman and Donkey Kong were another story. The easy diagonals in 1942 were a handicap in 4 way games. This was not something that improved as I used the device more. I most definitely do not recommend this for 4 way games, use a standard gamepad instead.

All in all, this is a very good controller. While it has some shortcomings, especially in 4 way arcade games, the wireless capabilities are a huge plus. As someone who routinely plays 10 feet away from his big screen, this is a big selling point. The selling price is about $90, which is a lot compared to similar wired joysticks, like the Mayflash F300, or wireless gamepads like my favorite, the Strike NX. AS of now, however, it is the best you can do for wireless joystick gaming on your Retro Box.

As always, have a skeptical day