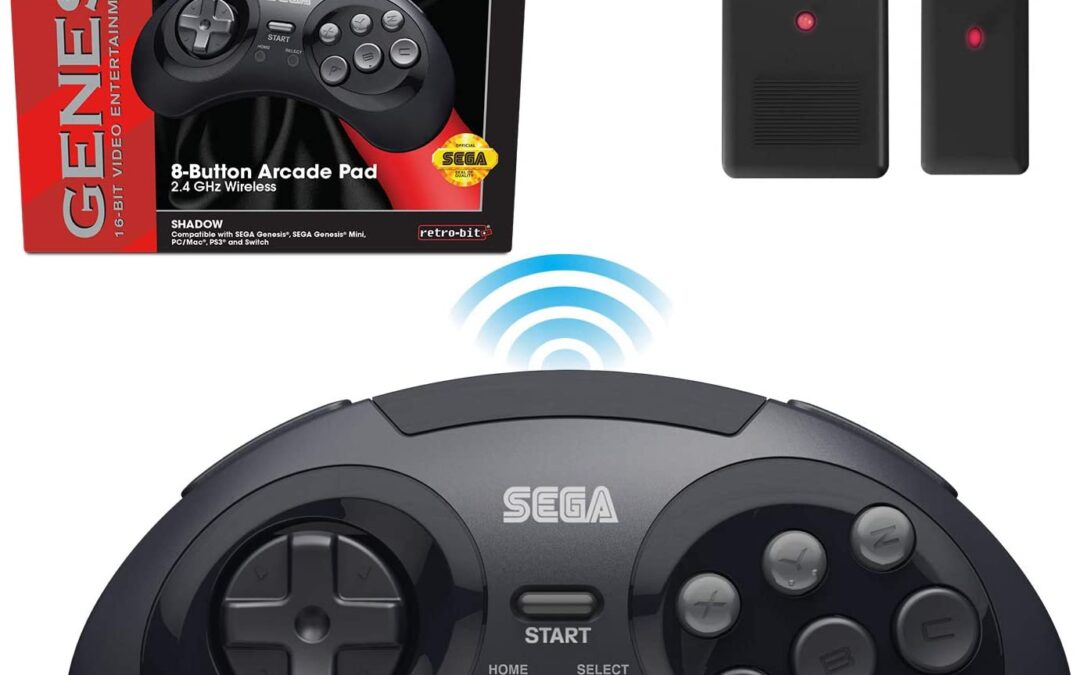 The Skeptical Geek loves his SNES and Xbox style controllers. They’re comfortable, reliable and work across a variety of different systems. Most importantly, I can get them reliably wholesale. In some ways, though, they don’t translate all that well to Genesis games, with it’s single row of 3 buttons, or 2 rows of 3 buttons for the 6 button controller. I ran across the Retro-Bit wireless Genesis controller at one of my favorite stores, Microcenter, and decided to give it a try.

This controller has a lot going for it, at first glance. It is a 2.4 Ghz controller, not Bluetooth, which is a plus in my book, as I despise Bluetooth. It has 2 receivers, one a standard USB, and the other plugs into an actual Sega Genesis, which is a nice plus for those into the actual old hardware. It even has an instruction manual, and comes in a nice carrying case.

The controller charges with a standard micro-USB cable, which is included. Pairing the controller with the receiver is not automatic, however, and not all that easy. You have to press the Sync button on the receiver, and the Start button on the controller. The sequence of events in the manual is wrong, and it may take a few tries to get it right. Fortunately, you only have to do it once, as it resyncs well upon reboot by just pressing the Start button.

The controller has 6 buttons in a 3 x 3 layout, as well as left and right shoulder buttons, which can be mapped to the trigger buttons, as you will be mapping 2 of the regular buttons to left and right shoulder. It feels pretty good in your hands, if not as solid as an actual Genesis gamepad, or as comfortable as a SNES one. The buttons are responsive, and there doesn’t seem to be any significant lag. The D-Pad feels really flimsy, as if it is about to fall off, and in my first 10 minutes of gameplay, it stopped working entirely. The A, B and other buttons were fine, but the directional ones didn’t work at all. Even plugging in another controller, and trying to configure it did no good, it wouldn’t register. A reboot solved this problem, and I was able to play for another several hours over the course of a few days, but the fact that it happened at all does not give me a warm, fuzzy feeling.

Next there is the matter of button layout. When you set up most controllers with a 3 x 3 layout, the buttons, you map the buttons as such: X, Y and L on top and A, B and R on the bottom. This is the layout that works best with classic fighters like SFII.. To correctly play such games on the Genesis, however, the controller has to me mapped like this: L, X and R on the top, and Y, B and A on the bottom. So no matter which layout you choose, games like Street Fighter will work fine on Arcade and SNES, but not Genesis, or vice versa.

I wish I could be more enthusiastic, but overall, I rate this controller as average. At the end of the day, if you are really craving for a Genesis controller, this will do, but it does have some quality issues that concern me. There is also a wired version for less than half the cost, if you prefer wires, or are pinching pennies. Amazon links are below.